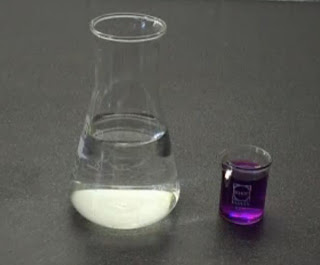 One of the demonstrations we do in our show is the classic chemistry experiment called the Chemical Chameleon. This is a color changing reaction that proceeds on its own through a number of different beautiful colors, and involves some really interesting chemistry.

The demonstration is done by preparing two solutions.

Note: It’s always important to use distilled water in any chemistry experiment, because we want to make sure to avoid any sources of contamination. Tap water has lots of other things in it that are good for you, but might be bad for a chemical reaction.

Simply pouring solution A into solution B gets things going! For best results, we swirl the flask to get everything well mixed. Immediately, the deep purple color of solution A changes to blue, and very quickly after that turns green. Then, much more slowly, over a few minutes, the green fades into a yellow-orange. This is actually caused by tiny solid particles of a new chemical, manganese dioxide (MnO2) that’s been formed during the reaction. If allowed to sit long enough, these will settle to the bottom and the color of the liquid will turn clear again!

Here’s a video of the experiment in action!

(Note: This is test footage that will be replaced with a nicer demo soon.)

Even though this experiment is easy to perform, there’s actually some really complicated and interesting chemistry going on! It involves something called a redox reaction. This basically means that new compounds are formed when one chemical takes electrons from another chemical. Here, the potassium permanganate is reduced, meaning it gains electrons, and the sugar is oxidized, meaning it loses some.

The compound on the left is purple, and the one on the right is green. As this reaction is going, there is some purple and some green in the solution and these combine to make it look blue at the beginning.

Next,  the green manganate is reduced again into manganese dioxide:

The manganese dioxide is a brown solid, but it’s in such tiny particles that it appears to make the liquid turn yellow.

So, that’s how you make colors with chemistry!

I’ve gotten several requests in the comments to talk about disposal, so I thought I’d mention it here. Proper disposal is an extremely important part of any chemistry experiment, to keep yourself and others safe and to protect the environment. In this experiment, the sugar is reduced to a different type of sugar (which is nonhazardous), and the potassium permanganate becomes manganese dioxide (MnO2, which is also harmless). The only thing we need to worry about is the NaOH, and this is easily neutralized by the addition of some acid until a pH of 7 is reached. I usually use 9.5M hydrochloric acid (standard concentration of hardware-store grade acid), which means we need about 26mL of acid to fully neutralize the solution. The resulting solution of sugary, salty water is then perfectly safe to pour down the drain.

90 Responses to The Chemical Chameleon